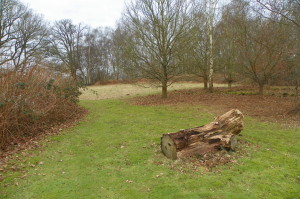 The Wildflower meadow at Foxhole

Foxhole was the first pocket park to be created in Great Brickhill in modern times and is situated to the North of the village along John Horncapps Lane. It is very different in character to Poors acre even though both sites have been used for similar purpose in the past.
The first evidence of land use on the site comes from the 1772 enclosures map of the village which shows use of the site as a quarry for extracting sandstone, presumably to use as a building material in the village.
Although a map of the village dating from the early 20th century still indicates describes the site as an old sand pit, at some point shortly after the land ceased to be quarried, and was put to use as an informal dump for refuse created in the village.
By the 1970’s the land had long ceased to be used for this purpose, but a suggestion was made, that the site was flattened to use as a possible football pitch, however although the levelling took place, it was not possible to make it large enough for football, so this idea never took off. In the 1980’s several oak, birch and holly trees were planted to improve natural habitats on the land but it was not until the turn of the millennium that a new access was created along with a circular path to create the pocket park that you see today which is about one acre in size.
At this time part of the park was seeded as a wildflower meadow, which has unfortunately fallen into neglect, but late last year a management process was started to encourage the growth of grasses and meadow flowers whilst controlling more invasive plants such as nettles, thistles and brambles which otherwise quickly out compete the wildflowers and result in a scruffy wasteland which cannot be enjoyed by the visitor. This management process emulates the cutting and grazing cycles in a farmed meadow, so expect the meadow area to be coarsely cut at intervals through the summer months. 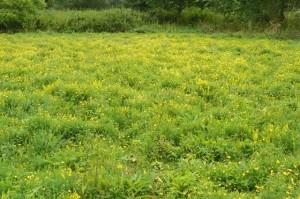 Wildflower meadow in summer, a sea of Bird’s-foot-trefoil

Today the trees planted in the 1980’s are now maturing and area of brambles provide a rich crop of blackberries to be harvested in the late summer.

This site uses Akismet to reduce spam. Learn how your comment data is processed.