The maps in these pages show a representation of Great Brickhill and its environs from the John Speed county maps of Buckinghamshire and Bedfordshire  first published in 1611 to the  1820 map which shows the newly constructed Grand Junction Canal, (now known as the Grand Union Canal) but pre-dates the London and Birmingham railway line, now known as the West Coast Main Line.

The enclosures map dates from 1772 and shows the parcels of  lands granted, and titles of ownership therein.

The Ogilvy map is termed a strip map. The section shown here is of the London to Holyhead road, otherwise known as Watling Street. It dates from the 1670’s and is the earliest road map in the UK  showing details of towns, villages and sitances between each.

John Speed (1552- 1629) was primarily a historian and to augment his Historie of Great Britaine, published in 1611, he produced and atlas of county maps of England and Wales, plus the countries of Scotland and Ireland, the latter with the four provinces as discrete maps. This atlas was called The Theatre of the Empire of Great Britaine. Today Speed is much more well known for his map making prowess than for his historical work, but what is unique about his county maps is he wrote a commentary  on the reverse of each map outlining life in the county, its environs, wealth and industry. The following are excerpts from Speed’s map of Buckinghamshire as published in his 1611 atlas ‘The Theatre’. 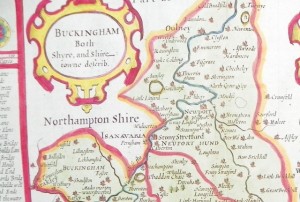 “The name of the shire. Buckingham for the plenty of Beech trees there growing, and those in the elder times of the Saxons called Bucken, may well be supposed from them to have the name as afterwards the whole shire had hers from this town Buckingham.”

“Air. The air is passing good, temperate and pleasant, yielding the body health and the mind content. The Soil is rich, fat and fruitful giving abundance of Corn, Grass and Marle. “

“Chiltern Hills. It is chiefly divided into two parts by the Chiltern Hills which run thorow this shire in the midst and before time were so pestered with Beech, that were altogether unpassable and became a receptacle and refuge for theeves who daily endammaged the wayfaring man, and for which cause Leostan, Abbot of Saint Al-bans caused them to be cut down, since when those parts are passable.”

“ The ancient inhabitants that were seated in this shire were the Cattieuchlani, mentioned by Ptolemy and them dispersed thorowthe Tract of Bedford, Hertford and this. There yielded , themselves with the first to Caesar under the Roman subjection, whose over-worn Empire ending in Britain, the Saxons by strong hand attained this province and made it as part of their Mercian Kingdom: yet it was first subdued unto them by Cherdike the West Saxon whose is memory in part continued in the Town Chersey, upon the west of this county, where in a sharp and bloudy battle he was victor over the Britains. So also Cuthwulf a West Saxon at Alesbury in the year of Grace 592 overcame the Britains and bare down all things before him: Yet no sooner was their Heptarchie wained and their Monarchy able to stand alone, but that the Danes before their strength and growth were confirmed, waxed upon them; and they, not able in so weak a hand to hold sast that weight of greatnests they had so grasped, gave place to their Conquerors who did many harms in this Province; for in the year 914 the Danes furiously raged as far as Bernwood where they destroyed the City Burg, the ancient seat of the Romans.”

Several towns are also described, the nearest to Great Brickhill is Stony Stratford.

“ A Town of ancient note is Stony Stratford the Roman Lactorodum, being built upon the ancient Causey-way which is called Watling Street. where remains the marks there even unto this day. At this place Edward the elder stopped the passage of the Danes whiles he strengthened Towcester against them, and herein King Edward the eldest since the conquest reared a beautiful Cross in memory of Eleanor his dead Queen.”

All spellings, italics  and place names in the above passages are Speed’s