The earliest archaeological artefacts discovered in Great Brickhill parish date from the Bronze age, but the earliest settlement in the area discovered thus far is the Iron Age hill fortress of Danesborough which is located at Bow Brickhill. Later when the Romans built Watling Street around 65AD, the settlement/camp of Magiovinium was located close to where it crossed the river Ouzel where there was a ford and evidence suggests also a bathing station. Little evidence of any Roman habitation in the Great Brickhill parish was found until 1978 when the remains of a Roman cremation was found in Holts Green.

When the Saxons arrived in Britain it is likely that the first settlement at the village site occurred as the name Great Brickhill has Saxon origins, with Hulle of Hyle being Anglo-Saxon for Hill and this can be combined with the Celtic word Brig, meaning top or summit. However, the first direct evidence of the village comes from the Domesday book, commissioned by King William in 1085 as the first census of the country to assess the wealth of the land he had conquered, and thus tax income he could expect. The Domesday book was written in Latin and each entry was very abbreviated but the entry covering Brichella as it was then known reads thus.

“William holds [Great or Little] BRICKHILL. It is assessed at 9 hides. There is land for 9 ploughs. In demesne [are] 4 ploughs; and 16 villans with 6 bordars have 6 s [sic] ploughs. There are 6 slaves, and 2 mills rendering 30s, meadow for 10 ploughs, [and] woodland for 100 pigs. All together it is worth 9l; when received 7l; TRE 10l. This manor Earl Tosti held”

Earl Tosti was a younger brother of King Harold, and died in the battle of Stamford Bridge in Yorkshire fighting with the King of Norway’s troups to assist him an invasion of northern England after being outlawed by his brother King Harold. By 1236 the manor of Great Brickhill had passed into the hands of Sir John de Grey and it remained in the hands of the de Grey family for some 300 years until around 1520 when it passed into the hands of the Earl of Worcester who then sold the manor in 1527 to William Duncombe It remained in the Duncombe family until the time of the Civil War at which time the Duncombe family were sympathetic with the royalist cause.

In medieval times, due to being on Watling Street, Little Brickhill was actually the largest of the three Brickhill villages and had such local prominence that Assizes were regularly held there, with executions held amongst other places, at the junction of Watling Street and Galley Lane, most probably known as Gallows Lane at that time. 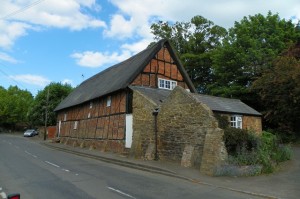 Cromwell Cottages at the village centre

During the civil war, in 1643 the parliamentary general, The Earl of Essex had troops stationed around the Brickhills and Fenny Stratford in order to protect the strategic route of Watling Street, and whilst stationed here Essex famously wrote two letters to parliamentary leaders in London complaining about lack of clothing and equipment for his troops and money to pay them, following the second letter, reinforcements arrived and after a 6 weeks stay in Great Brickhill The Earl of Essex’s troups marched westwards eventually to relieve the town of Gloucester.

It is interesting to note that after the restoration of the monarchy, for reasons not understood, Great Brickhill had become the largest of the 3 villages, and in a population count c 1676 it had a population of 480.

The next notable event in Great Brickhill’s history was the Enclosure award dated 30th January 1772, which comprised 1260 acres of land, the 1772 map reproduced in the maps section of this web site define the land ownership as per the award, see the link at the bottom of this page. The basic shape of the village is recognisable in the enclosures map, but it should be noted that many of the road names are different than the modern ones, examples being Pound Hole (Pound Hill) and Potters Lane (Jacks Lane) Dove House Lane (Heath Road).  It is interesting to note that evidence of a 13th centuary pottery can still be found in Jacks lane in the small fragments of pottery that litter the gully bed in places. 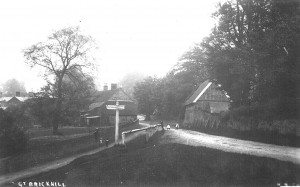 Stoke Lane taken from The Green around 1900.

In 1793 an act of parliament authorised the formation of the Grand Junction Canal Company and for it to raise £600,000 for the construction of a new canal linking London via a direct route to Birmingham, the canal which skirts along the modern western parish boundary was broadly completed by 1799 and cut the canal distance from London to Birmingham by some 100km. The modern Grand Union Canal name came in to being in 1929 with the merger of 3 canal systems, forced by increasing competition from railways and the emergence of road transport.

The next major project to skirt by the parish came in 1833 with the passing of an act of parliament authorising the London and Birmingham Railway Company to commence construction of a railway linking these two cities. The company was capitalised with approximately £5,500,000 and the railway was completed in 1838.

Great Brickhill continued to grow throughout this period, the 1811 census shows a population of 554 and a population of 590 in 1861, but thereafter followed a period of decline with the 1911 census showing a population of 430 and then down to 375 by 1931. Presumably the decline was due to the rising prominence of the railway towns of Leighton Buzzard and Bletchley which would draw away un-skilled agricultural labourers towards better paid jobs on the railways.

Towards the end of the 19th century the only major industrial activity to take place in Great Brickhill occurred. This was the extraction of phosphate nodules known as Coprolite which could be used to produce fertiliser when mixed with sulphuric acid. 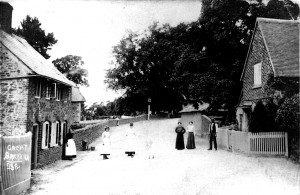 The extraction sites are close to the modern day John Horncapps Lane and the ore was carried by a small tram way down slope parallel to Galley Lane and on to the river Ouzel where it was washed and sorted for onward transport, most probably by canal to towns along the canal route for processing into agricultural fertiliser.

In the Second World War a stray bomb fell in the village, damaging the chapel in Pound Hill, presumably the target was the railway yards in Bletchley. Also in WWII the village billeted workers engaged in code breaking activities at nearby Bletchley Park.

Note, this page is very much a work in progress, if anyone has any additional information or old village 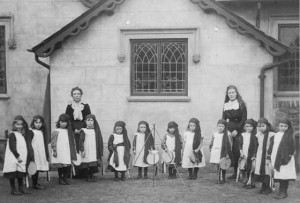 Girls and teachers outside the old School at Cross End